Ipswich started the new year at a new venue and with plenty of optimism which has certainly been rewarded with some excellent competition and rank results.

In January and February I welcomed new lifters who have since gone on to compete. An especial mention goes to Sazzy and Tom who have worked so hard to get their Pentathlon scores up and competed for the first time in September 2014. Other lifters have also had a good year: Edd, Joel and Rob have seen consistent progress, while Sue and Leah have both worked hard to regain form after illness.

In May many of us travelled up to Scotland to compete, judge and assist at the first ever WK Endorsed Scottish Pentathlon hosted by our good friends Forth Valley Kettlebell Club, headed up by Head Coach Niall MacKinnon. Fantastic turn out by Forth Valley themselves, but also Edinburgh, Wright Fitness and Garioch Kettlebells. We received such a great welcome, thanks everyone!

In June Ipswich had to manage without their coach while I travelled back out to the States to act as presiding judge at the World Kettlebell StrongSport Lifting Championships 2014, in Kentucky. I had been training hard and had hoped to compete but was taken ill in May and had to withdraw fro competing. Josh Dunn, a good friend and fellow student (we share the same awesome coach in Eric Liford) very generously wore an Ipswich t shirt on the platform to make up for my disappointment and he gained rank in StrongSport LongCycle with the 36kg! (photo of Josh with me below) 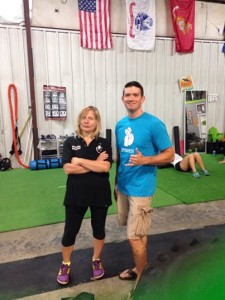 In September we were busy training for the Autumn Pentathlon on Sunday 14 September. We welcomed a strong Scottish contingency, as well as a team of 4 from Italy. A great event!

In October it was the One Hour Long Cycle event, joining lifters all over the world in a spirited Liftathon, in aid of Autism Research. After celebrating Hallowe’en with a Photo Shoot, our Suffolk lifters rounded the year off with the Winter Open.