It’s a busy time over here in Ipswich, and also over the water at WKC. In Ipswich we are on a countdown to the Kettlebell Pentathlon UK Spring Open (Sunday 3rd March) and working to ensure all competitors have a solid understanding of the competition rules. Over in the States, judging certification is being overhauled and the competition rules thoroughly reviewed. So it’s not surprising that the topic of conversation between Coach Fedorenko and me this week naturally turned to two of the lifter’s biggest concerns as a competition looms: No Counts and Stopped Sets.

No lifter is happy to get a No Count, but this is in fact helpful, constructive feedback which the lifter can use then and there to make sure he adjusts his form and improves the rest of his set. Lifters should expect the possibility of no counts, and will need to keep calm and carry on repping. WKC wants high standards, and isn’t going to back down from them. By giving feedback via a no count, WKC offers honest advice and is helping the lifter to get honest results.

So, what are the main reasons for a No Count?
1. Failure to fixate
2. Alignment issues – front and side
3. Not separating the clean in Long Cycle
4. Wrong exercise

Some of the key points about alignment come to play in the Snatch, where we are looking for both knees extended and in parallel alignment. We should be able to draw a straight line from the middle of the bell in top position down to the shoulders. As for performing the wrong exercise, if the lifter should be doing Push Press and they start to jerk, that’s going to be a No Count. However, if it should be Jerk and they execute Push Presses, that’s okay, we’ll count them, as the second dip of Jerk makes the lift easier. In other words, as Fedorenko puts it, they’re making it harder for themselves.

Fedorenko is concerned when a lifter gets overly distraught by a No Count. There is always going to be a first time for such things, he says. But if you get a speeding ticket, that doesn’t make you stop driving. In fact, stopping will only come across as a childish tantrum. Earlier today on Facebook he explained further: “ Instead of thinking a no-count is a negative, and keeping you from the reps you really SHOULD HAVE, think it is a positive, because it is correcting you to what should be. Feel better knowing you are getting such scrutiny. I know you will be better for it.”

The WKC judges and the deputy judges can help the lifter by trying to take away the potential shock of seeing the No Count paddle being lifted during their set. In a pre-flight briefing, the judge can warn the lifter about the main reasons for a No Count, and suggest he can make the judge’s job easy, by fixating, and not dropping the bell too soon. A No Count is no cause to argue with the judge: all athletes are equal on the platform, there are no favourites, just good and bad reps.

We moved onto the subject of stopped sets.

The main reasons for stopping a set are

1. Touching the bell with free hand

2. Bell being put down mid set

5. “Hanging” the bells against the legs. The lifter must remain in the Clean/Swing action.

Obviously, a stopped set is more drastic than a No Count. It means the end of the exercise in Pentathlon, but in LC it’s the end of the flight. So, it’s understandable if people sometimes get upset if their set is stopped. Sometimes it could have been avoided, and that’s disappointing for everyone. Fedorenko feels frustrated about experienced athletes who persist in performing switches mid rep, and who risk being stopped halfway through what was promising to be an excellent performance. “The athlete may have done 100 good reps, even heading for a new world record, and then he goes on to make a stupid mistake and we have to stop him, when he may have had another 100 reps in him! Changing hands mid rep is dangerous, he might drop the bell, and we won’t support this tactic. We do not recognise switches executed from rack to rack or mid rep, and competitors need to be aware of this.” 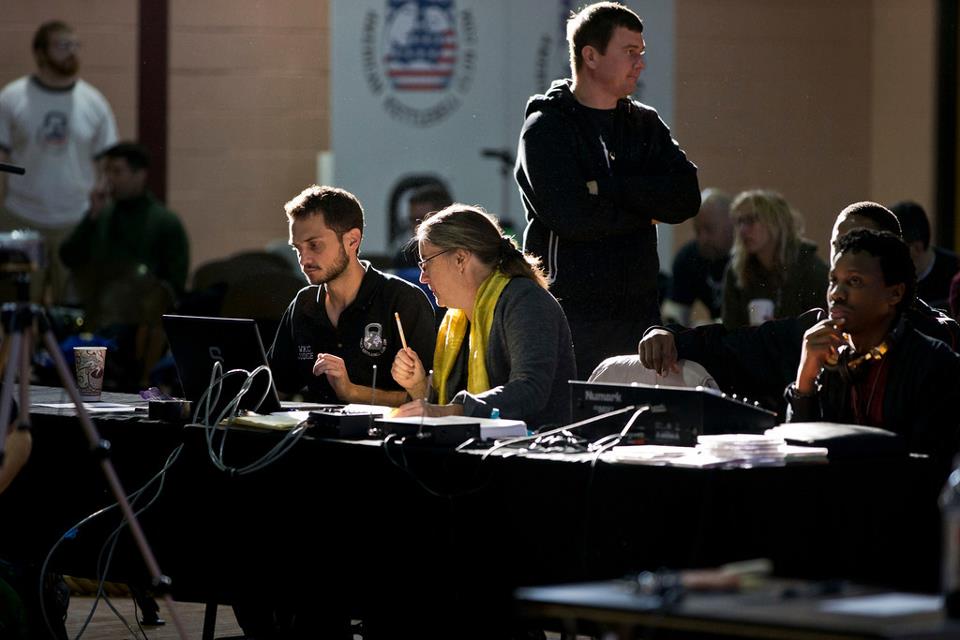 A stopped set still implies a score, and a medal of course. It is to be hoped that the lifter learns from the experience and bounces back at the next competition. However, on occasions, a lifter who gets on the platform comes away with nothing, due to disqualification. This will probably have a far greater impact on the lifter, but that sanction is necessary sometimes in order to maintain standards in the sport, and ensure sportsmanship.

Disqualifications will occur in the case of

So, we had itemised the causes when things go wrong, and talked them over. Hopefully when the new judging certification is published this will offer even more help to lifters preparing for any WKC competition. Fedorenko has high hopes for the future of WKC meets. “Our gym partners, hosts and WKC judges all know our standards, and this means we are able to grow the sport in a safe and professional manner. Our standards help the lifters to develop as athletes, and keep our sport rooted in good practice.”

The next competition is next weekend in the States, hosted by Ice Chamber, and we wish them all the best for an outstanding event.