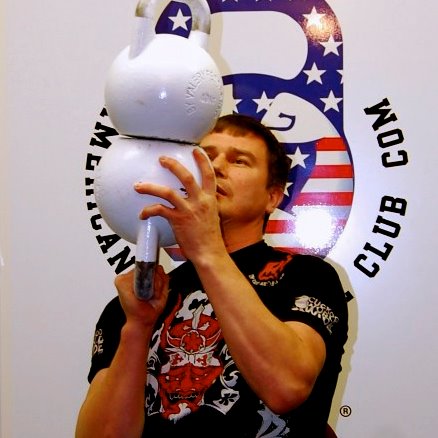 This was maybe the conversation I had been waiting to have, to understand my coach’s  drive for creating and marketing a better bell. I wanted to know what had led Fedorenko to want this. What versions of the training tool were available to him when he was in his teens, I wondered.

Q: What were the kettlebells like in Russia when you were a young man training there? Was there room for improvement?

A: Well, 25 years ago, there were a lot of manufacturers producing bells, maybe over 100 different makes and models. Then after 1985  Kettlebell Sport started to gain status, and was recognised as an official sport. Then manufacturers and sporting organisations all began to see the need to decide what they wanted from a bell. 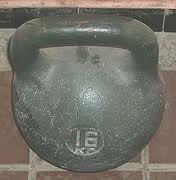 Q: There are lots of conflicting accounts of how kettlebell training began. What is your understanding of their history?

A: Kettlebells started out as weights used in the marketplace. The stall holders would want to attract the attention of the passing customers, and set out to scare or impress by demonstrating their strength with the poods (16 kg weights). In Russia even in the 1980s there were really only three weights: 1 pood, 1.5 pood and 2 pood (so, 16, 24 and 32 kg). They were marketed at men – and teenagers preparing to go into the military – as a hardcore fitness tool. So, a general, get-healthy tool, but then also as Girevoy became more prominent, it became the focus for competitive sport. 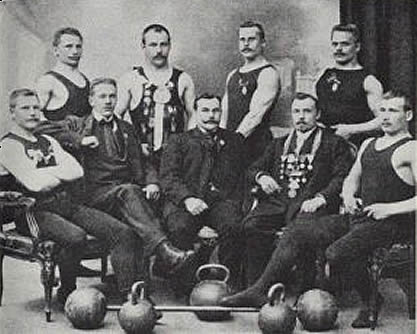 Q: So, they became more standard then, I guess?

A: Not really. There was a standard shape for competition bells, sure, But the handles were anything but uniform. The rule was not more than 35mm thick, but even so there was a fair amount of discrepancy. Now the situation internationally is a glut of wrong shaped bells. Even in Russia the competition kettlebells are much better than all the different shaped bells on sale across American and Europe.

Q: So, is there much difference between those Russian competition bells you were using back then, and the latest WKC bells?

A: For sure, yes. At WKC we have a standard of 33mm for the handle. It’s not been easy to work with the manufacturers on every detail and get these specifications where we want them but we have achieved it now with the new VF Precision bell.

Q: So, would you say that WKC has made a significant change to how the competition bell has shaped up these last few years, then?

A: Yes, it is only through us that the 8kg weight competition bell came into existence, the progression from light to heavyweight, and the concept of all bells having the same dimensions. Now, we have introduced the 4 and 6kg bells as well. It was also WKC that introduced the standard colour system so that the 48kg will always be gold, and the 8kg will always be pink. Now many other companies have copied this, but all these standards emanated from us. 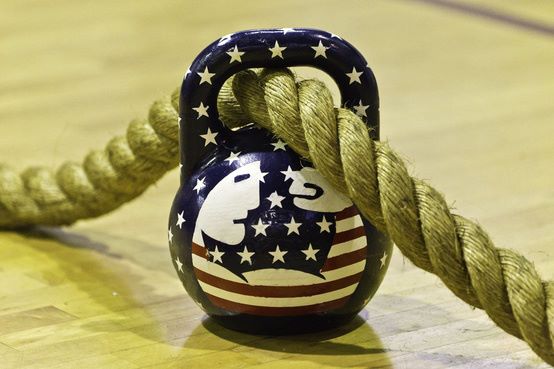 Q: Have you changed the shape of the bell at all?

A: Yes, take a look at the shape of the bell in our logo. Most of the Russian competition bells are not like this. We make a better bell, with a handle that the hand can fit comfortably inside. Even the corner of the handle has been improved. We don’t need there to be discomfort. Now for amateurs maybe this doesn’t matter. Maybe it’s like the wheels on a Mercedes. You could use a cheap replica wheel but it will feel different, even if it looks the same. So it’s the same with our bells. The upshot is that we see (poor) copies of our bells the world over We took care over our ProGrade, to produce a shape that was better suited to the work. Now with the new Precision bell we have introduced better quality metal and better composition.

Q: So how else have you affected the training model?

A: That’s a good question. Let’s look at rack position. You know what it should look like: no space between the wrist and the bowl of the bell, right? So, 20 or maybe 25 years ago I first looked at the bell in rack hold, and asked myself why isn’t it flat, why is it pushing against the wrist and causing pressure? For me, it is not a problem, I can rack the 60kg bell, but beginners will struggle with the discomfort. So now we make our bells with flat  sides cut into the bell, which take the pressure off. We had a mechanical engineer work out what we wanted from the bell, and now the bell falls into the correct position, with the flat spot exactly in the right place.

Q: Does the one size bell suit all, then?

A:The standard bell suits many, but it’s maybe not so ideal for those with a slighter build – so, many women and some slighter men too. That’s where our Fitness bells come into their own. For slighter lifters, they’re a better choice. They can feel as comfortable with the Fitness bell, as Denisov (all 192cm of him) does with the Performance.

Q: This focus on quality is very important to you?

A: Yes, it really is. We have spent the last seven years working to make the best kettlebells possible. In Russia, competition bells have been made carelessly. The sports federations try to find good samples, but it’s not easy. Russian athletes struggle to find consistent bells. I myself had a problem once in competition in Russia. I was lifting bells which had a plug in their base, and aiming to hit 132 reps, but after only 80 reps one of the plugs came out and sand or dust from inside the bell ended up in my eye. I couldn’t see out of that eye, and wanted to stop, but I kept going with just one eye open. It was an uncomfortable set, though. In Russia, the majority of the bells are still iron, but iron is not so reliable a metal as steel. If an iron bell gets knocked or dropped the handle is vulnerable and may well break off. The simple fact is, bells DO get dropped, so steel makes more sense. 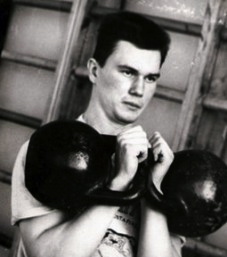 Q: Can you tell me about your new lightweight bells?

A: Oh, these are going to be so useful. They are really good bells, and weigh something like a gallon of milk. They still have the quality we expect of all our bells, but their weight makes them ideal for beginners, as well as some older people or those in rehab after injury. It’s easy for lifters to be disparaging about lighter bells, but you can make any bell provide a good workout. I can work hard with an 8kg if I do 100 reps of  a bottom up press with it. You can make the lightest bell seem really heavy with the right exercise. These bells can be good for youths too. My son is two now, and has already started lifting bells. They’re a good shape, and I think coaches will be very glad to have some for their clients. With a 4kg, 50 reps each hand, they can see their clients workout, make a productive start at weight loss for example. That 4kg bell will also be a good start for a 5-6 year old. The 8kg can sometimes be too heavy, too daunting, for people. We don’t want to deter people from starting out with kettlebells.

We shouldn’t underestimate  the ability of the young or the old. I have a story to tell you about my mother. One day, a while ago now, I told her about an 82 year old woman in California who performed 80 reps in One Arm Long Cycle Jerk, multi switch. Now, my mother is in her sixties and only has one kidney, so kind of disabled. But she decided she wanted to try kettlebell training, asked me for advice as to how she should start. I didn’t take her too seriously but told her she could try 10-12 reps with an 8kg. On her first day she did 100 reps, Long Cycle Push Press. Then the next few days she progressed to 200 reps a day, and after that there was no stopping her, managed 1000 reps every day for a month. When she told me that, I said she clearly gets the talent from me! I was worried about her, and wanted her to slow down and stick to 200 reps, but she didn’t want to, said that if she only did 200 reps she didn’t even break a sweat. So you see, 200 was the wrong decision for her.I didn’t take her seriously enough, but she wanted me to send her a 12kg and was considering competing. In her situation, she is older, but she wouldn’t have needed the 4kg. 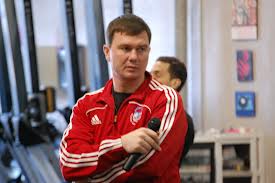 We had been talking for over an hour, and it was time to draw to a close. I had learnt a lot about the coach’s commitment to producing the best bell, and could see that he cares about the novice lifter as well as his elite athletes. I came away really keen to see the new Precision bells, and to get my hands on a pair of 4s or 6s. Most of all, I am proud to have been invited to bring the VF bells into the UK, even more so now I know of the work and determination that have gone into creating them.