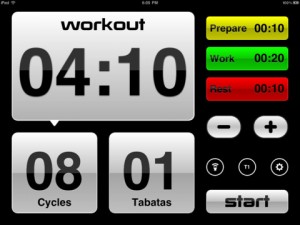 Over the last year I admit I had become over reliant on timers, metronomes and a favourite Tabata app. Initially, these were necessary as my body post-CNS meltdown had too many neural connections missing, and – more specifically – no natural body rhythm left. I needed the metronome even just to manage gait in the early days. It became the audio prompt to initiate spontaneous movement. To manage to box again, I had to use the metronome, as without it, I could not “will” my arm to lift. So I allowed myself a similar dependency on timers when lifting kettlebells.

When I started training for Pentathlon, I still relied on the timers to demarcate the minutes passing, even to hear when the next rep should be performed. However, since in competition I could not use a timer, I knew I needed to wean myself off it. My rationale was just because of competing, however. What I didn’t realise, until I got talking to Eric Liford at World Kettlebell Club, is that even with my sensorial limitations, I could actually be limiting my progress. That I can’t learn a new body rhythm, and understand how and when to push my body so well, when I am listening to an external factor. Valery Fedorenko values time over reps, so believes it is better to slow down but keep going. Adhering to the prescribed rpm is not as productive a training regime as finishing the set. When you take control over your own timing, you will be in a better position to work out for yourself how much longer you can go on.

So, having said all that, I had originally set myself the task of reviewing a few timer apps. I wanted to see if they could bring a new dimension to kettlebell training, to clients with or without neuro rehab issues. I looked at 3 kettlebell-focused timer apps, the metronome app, and using a generic gym timer. The conclusion I came to was that the kettlebell timers which sounded alerts each time I should lift (in order to hit a specific rpm) quickly became not a tool but a crutch. I stopped listening to my breathing, or trying to feel how much energy I had left, and was focusing solely on the electronic bleeps. I wasn’t learning how to progress my lifting, and that was easily reflected by a lack of progress earlier this year, when my dependence on the timers was at its height. The gym timer similarly limited my progression from the outset, I feel. Having lost some peripheral vision and hearing ability, and audio perception, I needed to develop my senses all over again, not narrow them down. Even without neural issues, I cannot see that the lifter will benefit from reducing his reliance on his body messages. Learning to keep going teaches you more about yourself, in any activity. Endurance is a discipline, after all.

The metronome has been a stalwart for me over this last year. Without it I could not begin a movement when I was still pretty sick. Now, however, I can walk or box, or press kettlebells and the metronome does not add anything further to that ability.So, it was time to set it aside.

This week, I made the big leap, dropped the timer alerts (the alerts that dictated the rpms) and now am just using a timer to tell me the minute markers. I can’t look up at a clock yet while lifting, so that’s my next goal. That and losing the mirrors. One step at a time. But I have also stopped recommending the rpm timers to my clients and guys on Facebook groups who ask for advice. So, a big change, then.