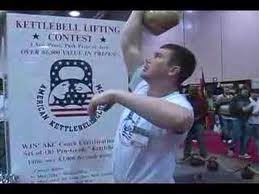 So yesterday I read an article about the value of using two hands in a swing, clean, snatch or press, where the lifter has not the strength to lift with one hand. This is an area in which, I guess, I have a fair amount of experience, both personally and with a succession of neuro rehab clients, and I am not impressed by the argument.

I just don’t see it. If the client relies on both arms to make the lift, the weaker limb doesn’t suddenly start working as it should, it carries on hiding behind the stronger.It is the same problem I will have if I rely heavily on (two handed) barbell lifts to build strength. The lift will only serve to reinforce the disparity, and delude me as to my lifting capacity. Example: if I lift a 12kg bell with two hands, the weaker arm may only be lifting a tiny, residual fraction of the weight, say 2kg, and the stronger arm carrying the rest. That weaker arm isn’t going to belatedly develop a conscience and start sharing the load more evenly. The stronger arm is going to be lifting maybe 10kg and the subliminal message reinforced that the lifter has to focus on that one side for strength. This inequality between the two sides is only going to be exacerbated by every imbalanced press and swing, until the single arm lift is reinstated.

The article also recommended a two hand clean, but I would rather one hand clean with a lighter bell, or even a wooden Indian club, as preparation for going heavier. The blogger was concerned some clients might not have the co-ordination to one hand clean, but I’d take the view that if you drop the bell or club a few times, so what? At least the arm is getting the muscular impression of independent work. I would rather encourage the client to practise flipping lightweight objects and then move onto flipping the bell in order to catch it again. Achieving this will help to dispel his nervousness, and his new confidence will carry over such that he will be less likely to drop the bell.

Similarly, two hand snatch is advised in the article, but I doubt this will have the correct alignment to progress the lifter’s ability. Hand position in fixation will be cramped, and the shoulder muscles will be recruited differently. To achieve Snatch, you need to Snatch, not compromise. I just don’t see the strategy as beneficial. Even a two hand swing is not optimum: fine for juggling maybe, but not for progressing in the swing.

When working with a lifter whose physical strength has been limited, I believe the way forward is to go down in the weights, all the way down until either arm can lift the weight, and then start working to increase the load. There are no short cuts in recovery from neurological damage, and few in muscular repair. The best a lifter can hope for is consistent progression, however small the gradations, and where the recovery is allowed to continue unevenly so will his results remain.